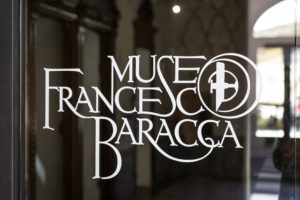 The anti-seismic consolidation works that lasted one year (April 2014 – May 2015) have given the chance to offer the public a new layout so that the building is today a true and proper house-museum.
The renovated museum displays about 250-300 relics directly linked to Francesco Baracca; at present to highlight the three core themes on which the museum is organised – history, technology and myth-, the museum is making a stronger emphasis on new technologies.

One of the newest attractions: a special flight simulator, open to the public, as part of the ALISTO (acronym for ‘Ali sulla storia’ or Wings on History, a 3-year cross-border project through the synergy between historical research and the development of a software for flight simulators. The simulator recreates the historical landscape by digital mapping, on the basis of digital terrain model (DTM), the Italian and Austro-Hungarian war aerial pictures and permits to see from high above both the landscape of 1915-18 and the present one perceiving its historical values and transformations, and at glance you will discover the deep transformations that occurred over a century.

The historical context of the dawn of aviation is also highly emphasised- an important sections is dedicated to display the ‘Baldini collection’ of highly valuable picture postcards of WW1. Thanks to screens and a ‘sound bell’, you will be able to enjoy the rich iconographical heritage of the museum archives and to listen to the funeral address by Gabriele d’Annunzio in front of Francesco Baracca’s casket.

The renewed museum layout will offer visitors a very cosy as well as interactive common space, interesting for adults, students and younger public, thanks to some solutions implemented using new technologies. The reopening, under the auspices of Palazzo Chigi – organisation in charge of anniversaries of national interests- is part of the many projects that commemorate the 100th anniversary of the First World War.

In the footsteps of Francesco Baracca – City Tour

The Museum is also the departure point of a city tour that includes the Monument, designed and finished in 1936 by Faenza-born sculptor Domenico Rambelli, regarded as one of the Italian masterpieces of the XX century, and the Mortuary Chapel, decorated by Lugo-born artist Roberto Sella, set up in the city cemetery inside which you will be able to admire the stately sarcophagus made of bronze from molten Austrian cannons of the Karst region.

The museum collaborates with the cultural association “Amici del Museo Francesco Baracca”, which is an association that makes historical research and promotes events.

How to get
The museum is located in the historical town centre. Car parks available nearby the museum.

Closing days
Monday; January 1st, May 1st, May 15th, the 2nd and 3rd week of August, December from 25th to 1st January