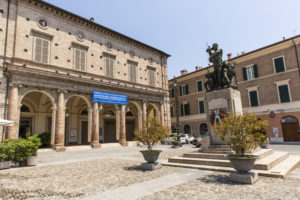 On the façade have recently been placed (2016) the five ceramic medallions made in the thirties of the last century, which depict five famous music and theater figures: Alfredo Catalani, Carlo Goldoni, Niccolò Paganini, Giuseppe Verdi and Richard Wagner.

The interior is decorated with frescos by Francesco Migliari from Ferrara (boxes’ parapets and vaults) and with stuccos of the Bolognese Antonio Tognetti.
On the sides of proscenium there are six medallions in gilt wood depicting famous people born in Bagnacavallo or in some way connectected to the town.
The original curtain, painted by Antonio Muzzi depicts “Senator Camillo Gozzadini’s visit to Bartolomeo Ramenghi”.

The theatre has about 400 seats all together in the stalls, in three tiers of boxes and in the galley.

In 1907 the theatre was named after the famous playwright Carlo Goldoni. His father lived in Bagnacavallo where he worked as a doctor.
In the early XX century it was regarded as a privileged hall for operas’ performing. Today it houses a high quality prose season (often including national premieres) and concerts.

How to get
In the historical town centre, in the main square piazza della Libertà. Car parks along the adjacent streets with parking meter. Accessible to disabled.