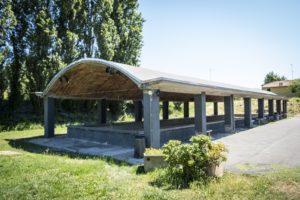 The ancient wash house of Massa Lombarda is a large pool of water, covered by a canopy supported by sixteen pillars. Powered by the Canale dei Mulini, the artifact, a symbol of the hard work of the laundresses, bears witness to moments of social life of past generations.

It was rebuilt in 1948, different and larger than the original destroyed by the bombing of the Second World War, present in the area at least since the late 1920s, as evidenced by some photos from the historical archive of the municipality of Massa Lombarda.

In the Canale dei Mulini which carries water only as far as Massa Lombarda, where a branch feeds the public wash house and a second branch detaches from the main street before the town and returns to the Santerno, in the stretch from Massa Lombarda to Lavezzola no more water flows from the nineties of the twentieth century.