He was born in Bagnacavallo in 1921 and died in Sant’Alberto on 5 December, 1944. He was a resistance fighter. 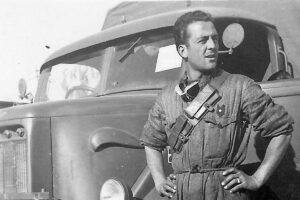 Immediately after the armistice, Cristofori joined the Ravenna Resistance Movement. When he became chairman of chiefs of staff of the “Sauro Babini” Brigade of the “Ravenna” Garibaldi Division, the young man stood out not only for his command abilities, but also for the bravery shown in countless actions against the Nazi-Fascists.

In the winter of 1944, during the violent fights between the German troops and the Allies, Cristofori crossed the front lines twice to make surveys and gather information, which was useful in order to better coordinate the partisans’ action. He was shot dead while he was getting ready to go back to his men.

In his mother land, a street and the city Section of the ANPI (National Association of the Italian Partisans) have been named after Italo Cristofori in his memory.
(Text extracted from the Bagnacavallo Section ANPI website).