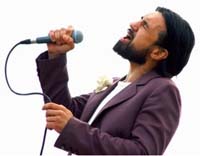 From 1992 to 2004 De Leo was the front man of the pop band Quintorigo, which competed in the Festival di Sanremo in 1999 and 2001, and won several awards, amongst which Premio Tenco in 1999 (awarded for the album Rospo).

After Quintorigo dissolved, he has collaborated and performed with various musicians, amongst which Enrico Rava, Rita Marcotulli, Gianluca Putrella and Paolo Fresu.

De Leo is also active in the field of experimental literature and video art, with projects such as a music version of Italo Calvino’s Le città invisibili and Songs – esercizi spirituali per il nuovo millennio with Carlo Lucarelli.

In 2007 he published Vago svanendo, his first solo album, which features collaborations with Alessandro Bergonzoni and Stefano Benni.
He currently performs with his JDL Quintetto. He is also part of the live tribute to Nino Rota “Il Bidone” (The Bin), a project by Gianluca Petrella, and of “Progressivamente” (Progressively), the Jazz/Progressive Rock ensemble conducted by Roberto Gatto.
On 7 October, 2014, his new album, Il Grande Abarasse, was released by Carosello Records.

A versatile artist gifted with a ductile vocal personality and flair for experimentation, John de Leo is one of the most interesting figures in the Italian music scene.
His voice-instrument is grafted onto an articulated composition conception that draws from popular folklore and jazz, going from rock to contemporary music, up to reading and radioplay.