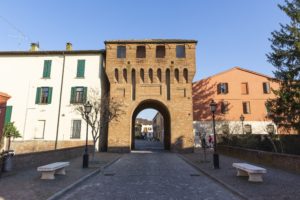 Originally, the only doorway to access the town of Bagnara was located on the western side of the castle walls; the entrance had a drawbridge which was destroyed in 1617. The doorway was guarded by a person in charge of closing it at night and reopening in the morning; his duties included also to make sure that no one may enter the castle with arms.

During the XVIII and XIX century the building of the doorway became the town prison and in 1814 a clock and a bell tower were added.
While on the run at the end of World War II, the German army destroyed the building, which was later rebuilt in 1949.

How to get
In the historical town centre. Car parks available.