Luciano Albertini is the pseudonym of Francesco Vespignani. Born in Lugo in 1891; died in Budrio in 1941. Actor, film director and film producer.

Albertini started his career as an actobat and sportsman, with a remarkable career in France and Germany, first with other companies and later with his own.

His earliest films were Spartaco (1913) and La spirale della morte (1913); both films featured his skills as acrobat.
After fighting in World War I, he went back to acting in 1918 and was the star of Sansone contro i Filistei, the first of a series of films whose protagonist Sansone was successfully performed by the strong and sporty Albertini. 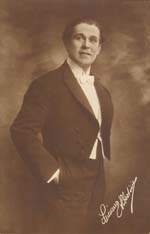 In 1919 he established the film production company Albertini Film; the company didn’t last long but produced the first Italian horror film, Il mostro di Frankenstein (1921), in which he also acted.

He then moved to Germany where he successfully worked as actor and film producer until 1932. In 1924 he was directed by Jay Marchant in The Iron Man, a Universal production which didn’t achieve great success.

His career ended in the early ‘30s, due to drink related health problems.
Albertini returned to Italy affected by economic and mental health issues and he spent the rest of his short life in a mental health hospital in Budrio, near Bologna.