THE SUNDAIL OF THE TOWN HALL

The sun dial of the townhall Palazzo Comunale in Bagnacavallowas probably originally located in the ancient Palazzo Brandolini, the XVth century palace which formerly occupied the area were are now located the townhall and the municipal theatre. 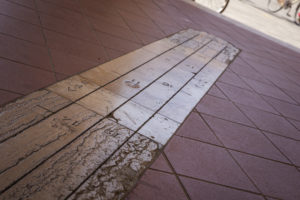 Once the Palazzo Comunale was built, during the first half of the XIX century, the sun dial was put under the arcades of the building in order to be a reference for the clock of the clock tower, which is located on the other side of the square.
During the restoration works carried on the townhall after war bombing, part of the sun dial disappeared, and it was only in 1997 that the municipality decided to bring the sun dial back to its original shape and function.

How to get
Historical town centre, in the main square, under the arcades of the townhall. Car park in the sorroundings. Disabled access available.