Andrea Gardini was born in Bagnacavallo in 1965. He is a former volleyball player and currently a volleyball coach. 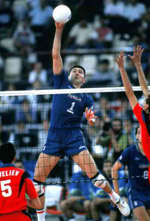 Gardini ranks amongst the top award winning volleyball players in Italy, boasting an impressive seven scudetti gained with four teams, together with trophies and awards won while competing with the national team (three times winner at the world championships).

He stopped playing in 2004 and started to coach.
Since 2007 Gardini has been deputy coach of the national volleyball team.