ARCHAEOLOGICAL SITE OF THE CASTLE OF ZAGONARA

The archaeological site of the Castle of Zagonara is located in the municipal area of Lugo near the current cemetery of Zagonara. It was the object of an archaeological field survey in 2009, as part of the “Bassa Romandiola” project, which was started by the University of Bologna.

Zagonara as a place name appears for the first time in a document dated to AD 950, while a church of S. Andrea di Zagonara has been known to exist since 1041. The first certain mention of the castle dates from 1217 when its construction by the municipality of Faenza was recorded. The village and castle were destroyed after a fierce battle in 1424.

Archaeological excavation at the Castle of Zagonara started in 2017; it was possible to identify the remains of the Church of S. Andrea and the adjoining cemetery area. The church, which initially consisted of a single nave, was probably extended to three naves after the castle was built in 1217 in order to cope with the population increase. Between the end of the 14th and early 15th centuries the church was extended a second time with the addition of side chapels and an external arcade. 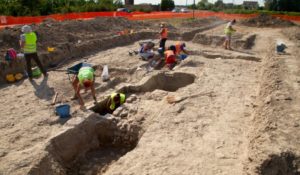