Carlo Piancastelli was born in 1867 and died in 1938 in Fusignano. He was a collector of books, drawings, engravings and different documents. 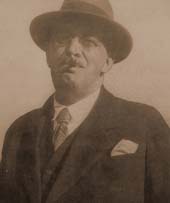 Carlo Piancastelli was born in 1867 from a rich family of landowners.
He studied at the boarding school of Modena, then he graduated in law at the university of Rome (1888) where, soon after, he also took literature classes. In 1890, when his uncle Tommaso died (he used to be the administrator of Piancastelli’s properties), Carlo gave up his studies and went back to Fusignano to take care of his family’s estates.

In the following years, beside taking care of properties, he set up the Piancastelli collection, which is made of about 50.000 books, of more than 200.000 documents, drawings, engravings and postcards, plus the rich collection of roman empire coins called “Monitiere” and a collection of paintings.
Between 1889 and 1894 he wanted to built a rich palace in order to host, beside the administration offices of his family business, the collection and his library.
Piancastelli was also concerned about the social reality of Fusignano: thanks to him, the kindergarden “Asilo Infantile” was built, the church of San Rocco restored and many bright young students could get financial help to go on in their studies.

During February 1938, Carlo Pinacastelli died and his collections were left, as his will desired, in the palace of Fusignano to be finally placed in the public library of Forlì.