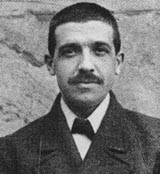 Charles Ponzi was born in Lugo in 1882 and died in Rio de Janeiro in 1949. He migrated to the United States, where he became one of the greatest swindlers of American history.

Ponzi was born in Lugo and spent his teens in Parma.
He enrolled into Rome’s La Sapienza university but later abandoned it, penniless.

He then tried his luck by migrating to the United States.
In 1903 he reached Boston and worked as a dishwasher in a restaurant; he was then promoted to waiter but was soon fired for having committed small thefts.
In 1907 he moved to Montreal (Canada), were he became a consultant of the recently founded Banco Zarossi, a bank that dealt with Italian immigrants’ savings. The bank was undergoing a difficult period, due to some bad real estate loans; eventually it went into administration. Ponzi stayed in Montreal long enough to raise the money for his return journey to the U.S.A. but he was accused to be the responsible of frauds and jailed in Québec.

Once outside jail, Ponzi went back to Boston were he plotted a scheme to make money.
This consisted of sending money to Italy, where a business partner would buy International Reply Coupons and then send them to the U.S., where they would be exchanged for stamps and then money would be redeemed from those.
He set up a business to promote this system which indeed started to gain great profits, to the extent that Ponzi even bough a bank in a relatively short time.
But Ponzi’s scheme soon proved to be a ‘financial bubble’ and started to fail, ending eventually in bankruptcy.

On November the 1st 1920 Ponzi was found guilty of mail fraud and sentenced to five years in a federal prison. He was released on October the 7th 1934 and immediately deported to Italy. His life ended in poverty and he died in Rio de Janeiro.