S. Girolamo church dates back to the middle of the XV century. It was assigned to the congregation of the Gerolamine monks of Beato Pietro from Pisa in 1496. They built the monastery and the church. The first name of the church was Santa Maria, then Santa Maria delle Grazie and San Girolamo; finally, in 1537, it was named after S. Girolamo only. The building was almost completely destroyed by the 1688 earthquake, then restored and completed in 1718. 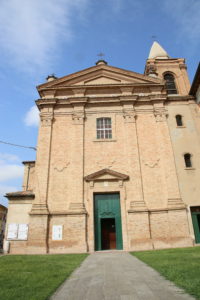 The interior preserves a sixteenth century canvas by an anonymous painter from Romagna, depicting “S.Thomas’ disbelief”.
In the third chapel on the right can be seen the tombstone of Giulio Goldoni, father of the famous playwriter Carlo. Giulio Goldoni worked as a phisician in Bagnacavallo and died here in 1731.
The second chapel on the right houses a willow tree crucifix of fine craftsmanship, which dates back to the end of the XV century – beginning of the XVI century.

The monastery annexed to the church used to house a famous school of Philosophy and Theology, attended by students coming from the whole Region. In 1839, it became a civil hospital and kept this function till the nineties of the last century.