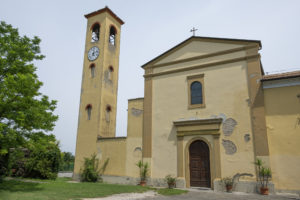 The present S. Savino church was designed by Renzo Strumia and finished in 1950. Inside the church can be admired the Baptistry, a statue depicting San Savino by Raoul Vistoli and the Via Crucis (1982) created by the ceramists Bartoli and Cornacchia from Brisighella.

Right to the entrance there’s the sarcophagus of San Savino. Dates back to 440 – 450; it is made of marble, it’s quite big and heavy, with decorations on three sides and an upper cover.
The front side carries the Costantine symbol which is sorrounded by two lambs and date-palms. The right side carries the image of two peacocks drinking from a pot of water; the left side has two doves worshipping the holy cross while sitting on vine sprays. Both the frontons carries the images of two peacocks, which symbolize rescue in the next life and contemplation of God.

Although it’s not historically proven that this sarcophagus has carried the body of the saint, who was originally martyrized and buried in the town of Spoleto, anyway it is sure that in 1443 Astorgio II Manfredi took from this sarcophagus pieces of a human corpse and brought them to Faenza; as they were thought to be of San Savino, those relics were welcomed to Faenza and kept in a very important chapel in the town’s dome. This sarcophagus is one of the many old and preciuos Byzantine art works in the province of Ravenna; among sarcophaguses, its style is considered to be sybolic, due to the animals depicted on it (to each animal corresponds a holy symbol).

How to get
The church is in the village centre. San Savino is about 4 km from Fusignano.