He was born in Faenza in 1767 and died in Fusignano in 1822. He was an Italian general of the Napoleonic army. 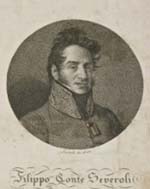 He enlisted during the Revolution, became colonel in 1798 and two years after brigadier, as he took part in the Napoleonic campaigns in 1800.
From 1806 to 1813 he took part into several European military campaigns, until he came back to Italy in 1814, where he was in charge of Piacenza’s defense and Parma’s conquest as asked by the viceroy Eugenio.
After the Austrian Restoration in Lombardy, he entered the imperial army as lieutenant-marshal and governor of Piacenza.