Giovanna Righini Ricci was born in Lugo in 1933 and died in Bologna in 1993. She was a writer of books for children and teen-agers and the author of essays and newspaper articles. 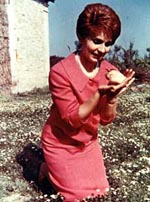 Giovanna Righini Ricci was the first child of Luigi Ricci and Angelina Marini; she was born in San Bernardino, a small rural village within the municipality of Lugo.
In 1940 her family moved to Conselice and stayed there until 1956.
During the war Giovanna’s education was interrupted, but later on she enrolled at the “Liceo Ginnasio F.Trisi” in Lugo, one of the oldest high schools in the province of Ravenna. She then gained a degree and started to teach French and then Italian.

From the ‘60s onwards she increasingly started to dedicate more time to writing fiction (novels and short stories) and also surrounded herself with writers friends that encouraged her to write and tell her own stories.

In 1972 she moved to Turin with her family and restarted to teach until 1978; following this year she completed devoted her time to writing fiction. She also wrote pedagogy books, articles and essays, as well as magazine essays about the introduction of sex education in compulsory education.

Conselice’s municipal library is named after Giovanna Righini Ricci.
Giovanna Righini Ricci has been one of the most innovative fiction writers for young people over the past three decades of the XX century in Italy. Her sensitivity and high psycho-pedagogic competence shaped Giovanna Righini Ricci’s writings and made her an innovative educator, constantly engaged in asserting a pedagogy suitable for students. In this respect, beside her other educational works, her approach to sexual education is particularly important and innovative.