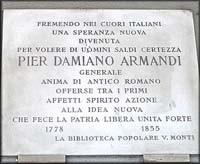 Armandi was born in Faenza in 1778 and his family was from Fusignano, but he was raised and studied in the cities where his father used to work as an employee.

Graduated from the military school “Scuola Militare” in Modena, he was part of the Republican and Imperial army. He fought several battles and in Bautzen’s battle was nominated artillery colonel by Napoleon.

After Napoleon’s fall, he moved to Rome, where he was tutor of the children of Luigi Bonaparte, the former king of Holland, and where he also administered Girolamo Bonaparte and Ortensia’s properties.
During the 1831 revolution, he became major-general and was nominated war ministry by the revolutionary govern of Bologna. Thanks to Pio IX’s amnesty, he came back to Italy from France, where he had previously escaped, and gloriously took part in the defence of Venice. He then moved back to France where he was nominated imperial librarian of Saint Cloud by Napoleon III.

As a writer, he achieved great success with the work “L’histoire militaire des éléphantes”.