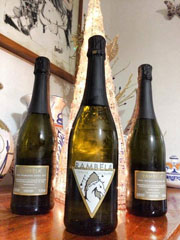 Rambëla is a young wine with ancient origins, protected by Consorzio Il Bagnacavallo. It is produced with 100% of grapes from the Famoso Vine, which long ago was called Uva “Rambëla”, or simply “Rambëla”.

The “Rambëla” is an autochthonous vine that has been rediscovered, after having been abandoned for decades due to its aromatic character, as it did not fit in a market that was looking for a more “anonymous” product.

In the glass, the wine is straw-coloured, golden, clear and compact; the olfactory sensations are very intense, with characteristic traces reminiscent of the Muscat and due to which it can be included among aromatic vines.

The “Rambëla” can be paired not only with all fish-based dishes but also with spicy and aromatic first courses, with poultry-based preparations or with piadina, salumi and cream cheeses.

The “Rambëla” is part of the basket of typical products of the Consorzio “Il Bagnacavallo”.