Clara Allegra Byron was born in 1817 in Bath (UK) and died in 1822 in Bagnacavallo. She was the daughter of the famous english poet Lord George Gordon Byron. 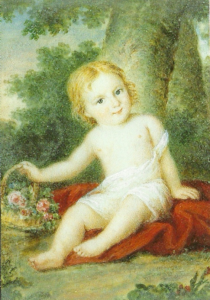 She was the natural daughter of Lord Byron and Claire Clairmont, Mary Shelley’s stepsister. Her father recognized her, although his love story with Claire had been really short and, already before Allegra’s birth, the  poet was already tired of his relashionship with the mother. Byron promised to take care of Allegra and Claire, on the other side, promised to disappear. Even though against her will, Claire accepted this compromise.

During March 1821 Byron came to Italy with the little Allegra and, while he was guest of the countess Teresa Guiccioli in Ravenna, he left his little daughter in the girls’ boarding school run by the capuchines nuns in the convent of S.Giovanni in Bagnacavallo; at the time it was a famous boarding school for girls coming from wealthy families. During her stay in Bagnacavallo, Shelley’s family visited Allegra, stating she was staying in a good place and she was in good health.

After all, on April the 21st in 1822, Allegra died at the young age of five for an illness which hasn’t been clearly stated. Claire wanted her daughter’s corpse to be brought back to England. Apparently it was placed in the cemetery of St. Mary’s Parish Church in Harrow, Middlesex but without a tombstone because it is illegitimate, its grave is not yet identifiable.

At the entrance of the convent of S. Giovanni there’s a memorial tablet which reminds of Allegra’s.