Bartolomeo Ramenghi was born in Bagnacavallo in 1484 and died in Bologna in 1542. He was a painter, influenced by Raffaello. 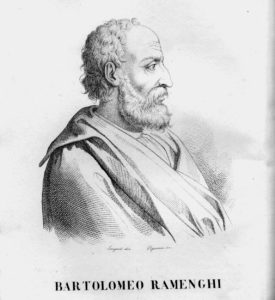 Bartolomeo Ramenghi, known as Bagnacavallo senior, was born in Bagnacavallo in 1484 and died in Bologna in 1542.

In 1506 he moved to Bologna, where he began working with Francesco Francia and Lorenzo Costa, being influenced by their style, but also by Amico Aspertini’s work, with whom he worked together in the decoration of the the Oratory of Santa Cecilia. During those young years, he was influenced by the lively chromatism of Ferrarese painters; then, in his more mature style, he was much more under Raffaello’s influence.