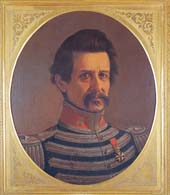 At a very young age he began studying engineering, but when he was seventeen he enlisted first into Napoleon army, thus becoming lieutenant general, and then he was part of the British army.

After one year in the army, having saved some money, he decided, together with his trustworthy friend Ferrari, to try to start some business. So they left towards Constantinople, but the ship on which they were travelling wrecked. Having lost all their money, they went back to military jobs and, since they didn’ find work in Turkey, they left toward America. Here they were part of the liberation army of Simon Bolivar till 1822.
In that same year, they decided to go back to their homeland and set up a farm in Massa Lombarda.
But Codazzi wasn’t made for a sedentary life, so four years later he left again for America. He enlisted in the army again and, as a cartographer and geographer, he left to discover Venezuela and Colombia.

Codazzi’s researches were really important, not only for the countries in which he worked, but also for Europe itself: his very detailed maps were carefully studied especially in France and used to choose the right areas where to settle European colonies.