Alberico was born in Barbiano, a small village near Cotignola in 1348 and died in Citta’ della Pieve in 1409. He was a mercenary captain.

He trained in the art of war within John Hawkwood’s mercenary troops which, it was about 1365, made an orrible massacre of the towns of Faenza and Cesena while fighting for the Pope’s pay. 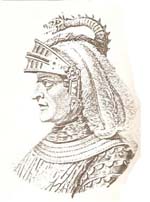 Alberico took part to those slaughters and after, since he was feeling regret for it, he left John Hawkwood’s army and decided to constitute his own troop which was made only of Italian soldiers and was named after St. George. From 1378, the birth year of the St. George army, to 1392, Alberico fought as a mercenary soldier all around Italy for several noblemen, Popes and kings.

On April the 10th in 1392 he was defeated for the first time and was taken prisoner nearby Ascoli. After he was set free by Gian Galeazzo Visconti and in the followimg years he fought for him.