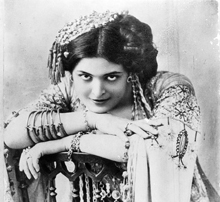 Alessandrina Drudi was born on September the 24th 1878 in Cotignola and died in Villa Verucchio in 1961. She was an opera singer.

Her early times were not easy, since Sandrina’s family was quite poor; so, it was decided that she would have gained her education thanks to the nuns of “Don Morelli”‘s boarding school, who took care of her and gave her education. There she also studied music and learned to play piano thanks to skilful pianist Carolina Codecasa.
The kind help of Professor Umberto Masetti, who was a composer and singing teacher, together with public funds raised thanks to Giuseppe Strocchi, the mayor of Cotignola, made possible for Sandrina to enter “Liceo Musicale” and study in this important Bolognese music institution which, at that time, was directed by Giuseppe Martucci, composer, pianist and conductor.
In 1899 she brilliantly graduated and few months after, on September the 2nd, she made her debut in Lugo at Rossini theatre, playing in “La Bohème” by Puccini as a soprano. She immediately gained critics’ admiration and her success kept going on even in the following years.

In 1902, she got married at the young age of 24 with the Bolognese nobleman Pier Giovanni Dragoni, who was a famous owner of lands in Bagnacavallo and had been courting her; in November, during that same year, she gave birth to her daughter Piera.
Unfortunately, her husband’s wealth was undergoing a bad situation and she was suggested, in order to earn more money, to give up with opera and start playing operetta, which was really on fashion at the time. Sandrina, after all, wasn’t really sure about this choice and so she wanted to assume a different name so, in case she had failed in the operetta performance, at least she would have kept untouch her opera career and go back to perform opera. So, with the pseudonym “Gea della Garisenda” she started playing operetta in 1907 as she performed in “La Mascotte” at the Milanese theatre “Dal Verme”; this operetta marked a brilliant success which kept going on also in her shows performed in Bologna.
Around that time, the relationship with her husband started to deteriorate for various reasons; amongst which his incompetence in acting as her agent. Indeed, Gea experienced financial difficulties and had to borrow money from her admirer Teresio Borsalino, whom actually became her partner after she split up from her husband.

The singer had achieved great national success and in 1916 she also started the acting career; she played in Mario Ceccatelli’s “La Vergine innamorata”.

Before the ’30s, Gea had decided to stop working and to retire in Romagna, in Villa Verucchio.
In 1958 she suffered a severe pneumonia that weakened her body very much; three years later, she died in her house in Villa Verucchio at the age of eighty-three.