It was in the sixteenth century when the game – in spite of its Greek-Roman ethnogenesis – took on the features that were kept, with some transformations, up to the nineteenth century, the golden period of such game. As proof of how popular the game and players were in the XIX century, there are writings dedicated to them by Italian and foreign authors. 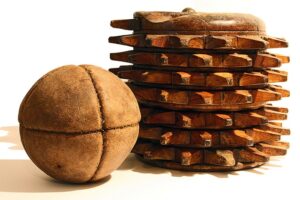 Origins and history. The game in Italy
If in the sixteenth century it was practised by noblemen in their courtyards, during the seventeenth and the eighteenth centuries the game moved to squares and streets as it became a hobby also for middle and working classes.
This practice was so widespread in the nineteenth century that it required a real regulation on the part of local administrations. As a matter of fact, it was during this century when arenas were specifically dedicated to the game; in the twentieth century, their name was changed to “sphaeristerium”. In the nineteenth century, before the unification of Italy, there were around fifty active sphaeristeria spread in central Northern Italy. Scarcely practised in Lazio and almost absent in Southern Italy, the game spread specially in Tuscany, Piedmont, Liguria and Lombardy, with absolute primacy, before the unification of Italy, of the pontifical territories.

The rules
The inherent spectacular character of the game, due to both the physical fitness of players and the strength demanded from them, led to some changes in the rules between the end of the eighteenth century and the beginning of the nineteenth century in order to increase its level.
On the field, which was divided in the middle, the players were divided into two teams, each of which was made up of three members: the battitore (batsman, the most prestigious role), the spalla (back) and the terzino (full-back). The terzino was in the middle of his half of the court, the spalla at the back, and the battitore next to the spalla. On the dividing line, there was the “cacciarolo”, that is the person who kept the score, together with a member of the jury. At the cacciarolo’s signal, the battitore ran down from the inclined plane located at the bottom of the court to hit the ball that was thrown to him by the “mandarino”, who was the thrower for both teams. The rival team answered back to the throw either on the volley or after one bounce of the ball. The match ended once the number of games or the time that had been previously agreed was reached.

The game in Bagnacavallo
When in September of 1828 Bagnacavallo was upgraded to the status of city, during the days dedicated to the traditional solemnity of St Michael, several events were organised, including «a Ball game in the new arena, and a horse race on the main street». According to some sources, however, the game was already present in Bagnacavallo since 1711.
The availability of one of the most beautiful and functional courts immediately turned Bagnacavallo into a desired place for the greatest champions and helped high-level local players to assert themselves, being thus able to measure themselves – on an equal footing – against the best players at that time. 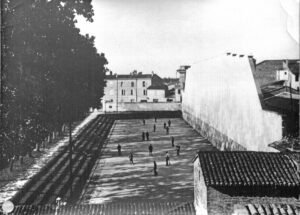 The sphaeristerium of Bagnacavallo
In the first half of the 18th century, the place reserved for the ball game was under the walls near Porta San Domenico, where Largo Alcide De Gasperi square is currently located. It is known that even before this, the game was played in the area in front of Folicaldi Palace, to the left of Porta Superiore. Since the beginning of the 19th century, players and followers used the area under the walls, near Porta Pieve, which is known as “la fossa delle Monache” (the Nuns’ pit) because it was next to St Clare convent. It is still easy to imagine how in other big and small cities, people used to play wherever there was a free space: on the street, in squares and in big courtyards.
As the game gained ground as a show loved and followed by an increasing number of people belonging to all social classes, the construction of suitable facilities became necessary (see the historical images here), including, in addition to an adequate ground and a high wall, also flights of steps and spaces for the public. The Judiciary of that period decided its final location next to Porta Pieve, which was then called Porta di San Pietro.
Designed by the municipal engineer Luigi Dorna and built between 1823 and 1824, the court was flanked by an elegant and monumental brick wall – 88.60 m long, 10.40 m high and 45 cm thick – with buttresses to give it more stability and resistance. The inspection was conducted on 5 January 1825. A violent hurricane that raged a few minutes shortly after 1 p.m. on 7 September 1873 caused it to collapse. The restoration of its original appearance enabled the organisation of memorable challenges with the greatest ball athletes
in the court for several decades. On 19 April 1964 the wall collapsed again – once more due to an extremely strong wind, but also to the precarious conditions of the foundations and, it is said, to incorrect maintenance works. This is how an element that had characterised the urban landscape of the city disappeared, a silent witness of the golden time of the ball game and of the passions of the people from Bagnacavallo for their champions.