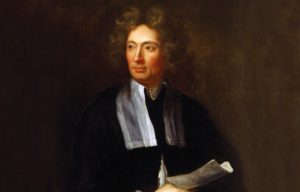 Arcangelo Corelli was born in Fusignano in 1653 and died in Rome in 1713. He was a composer.

Corelli was born in Fusignano on February the 17th 1653 from a rich local family.
His music training began in his home town, then he studied in Faenza, Lugo and, finally, Bologna where, thanks to the teaching of great violinists like Giovanni Benvenuti and Leonardo Brugnoli, he became part of the local academy ” Accademia Filarmonica” in 1670.
The following year he moved to Rome. Here he studied composition with the tutor Marco Simonelli, he also began playing as a professional violinist in the church of “S.Lucia dei Francesi” and worked for important local personalities. Apart from some tourneés in Italy and outside the country, he lived in Rome all his life, till his death on January the 8th 1713.

He produced four collection of “Sonate a tre” (Opera I, II, III, and IV), one of Sonate for solo violin and “Basso continuo” (Opera V) and one of “Concerti Grossi” (Opera VI). Corelli is also important for his educational and teaching activity, since he started to practice violin teaching techniques that became very popular in Europe till the end of the XVIII century.

The choir “A.Corelli” is based in Fusignano.
It started in 1971 and today it has 30 singers led by conductor M.stro Paola Pironi. The choir actively takes part to competitions, showcases, exchanges and concerts in Italy and outside.
“A.Corelli” choir proposes a wide repertory in his music performances, from operetta to opera, from short intermezzo to solo pieces of famous aria performed together with the choir (Info: tel. 0545 51384/ 0544 83298/ 0544 82379; email ppironi@racine.ra.it ; web http://www.corocorelli.it/index.html ).