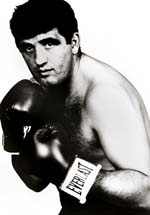 Damiani won the silver medal in the world amateur boxing championships in Munich in 1982 as well as in the Olympics in Los Angeles in 1984. He subsequently won 29 consecutive matches and was awarded WBC international champion, EBU European Champion and WBO World Champion.

His career ended in 1993 after winning 30 matches (24 KO) and after losing twice against Ray Mercer and Oliver McCall. He was the manager of the Italian boxing team at the Olympics in Beijing, where the team members gained a gold medal, a silver and a bronze one.

Damiani and Primo Carnera are the only Italians to have been heavyweights world champions.