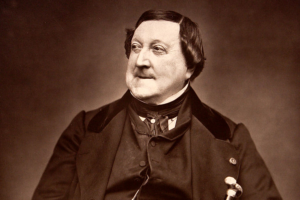 Gioachino Rossini was born in Pesaro on February the 29th in 1792 and died in Passy in 1868. He was one of the most famous composer of the XIX century.

He was born in Pesaro on February the 29th in 1792; his father was a musician and his mather, who was a milliner, could sing quite well.
The young Rossini started very early to study music, attending singing, spinette and horn lessons, first with his father and then with Giuseppe Malerbi, attending his school from 1802, the year in which Rossini’s family moved to Lugo.

His debut show was in Venice, when he was just eighteen years old, with the play La Cambiale di Matrimonio.
In the following two years, Rossini’s composing production was very intense, and the top was his debut at Milan’s Scala theatre in 1812 with La Pietra del Paragone. But his greatest and definitive successes were the operas Tancredi and L’Italiana in Algeri, which were played in Venice in 1813.

From 1815 to 1821 he worked in Rome and Naples, where, in 1816, he performed Il Barbiere di Siviglia; at the same time, he was gaining great success also in Milan at Scala theatre with La Gazza Ladra.
In 1822 he left for Wien, where he gained great success and where he met Beethoven. In 1823, after a short stay back to Italy, he went to London, where he earned great rewards and gifts even though he didn’t perform any new opera. In the following years, he accepted to become conductor of Théatre Italien in Paris. But Rossini’s creativeness was beginning to fade and he performed at Opéra old pieces and works which were made out of previuos operas; anyway he gained good success thanks to the mixture of French tragedy with Italian melodrama.

Starting from 1831, and then more seriously from 1868, he suffered from sickness. On November the 13th 1868, Rossini died. With a solemn funeral, he was buried in Paris at Père Lachaise cemetery, nearby Chopin and Bellini; anyway, in 1887, his body was brought in Florence where he now rests in S.Croce church.

In Lugo it’s located Gioachino Rossini’s home and museum (it’s in via Giacomo Rocca, 14). The house has been home of the Rossini’s family for a long time; now it hosts art exhibitions.