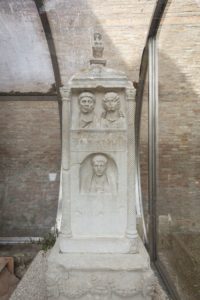 The “Caio Vario” funeral stele was found in 1817 nearby Cotignola.

The stele, which dates back between 30 and 40 A.D., is one of the type called “a pseudoedicola” (the shape has half niche); it is marked by a surface divided into niches, decorated with sculptures of portraits alternated to dedicatory inscriptions.
The superior niche hosts two busts: on the left side, the one rapresenting Caio Vario, who wears a toga and a tunic, as it used to be for socially important people at the time, while on the right side stands his wife’s bust (a freedman, which means a person who formerly used to be a slave, but then became free), depicted in the typical female coat (it’s named “palla”) worn over a tunic.
The inferior niche carries their son’s bust.
The monument stands on a square base which is decorated with festoons and theatre masks: it has a smooth surface base from whose corners two spiraliform columns sticks out, the columns have Corinthian capitals who carry a trabeation on the top of which stands a small fronton decorated with a Gorgon head and acanthus leaves. On the top of the fronton of the funeral stele there is a sphinx.

Near the “Varii” funeral monument can be seen other archeological finds which were found in the territory of Cotignola, among those there is the funeral stele of Caio Rufrenio Severo, which dates back to the end of the Ist century A.D. and a grave of the type named “alla cappuccina”.

How to get
The monument is in the courtyard of Palazzo Sforza, in the historical town centre. Car park along Corso Sforza. Disabled access available.