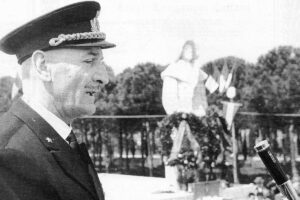 Luigi Angelo Longanesi Cattani was born on May the 4th in 1908 in Bagnacavallo, son of the local noble family Longanesi Cattani.
After classical studies, he entered the Navy Academy when he was just sixteen.
After high school graduation, he tried his first military experience as midshipman and sub-lieutenant in the Navy. In 1930, back to the Navy Academy in Livorno, he attended the advanced course, and then he moved to the Taranto institute named “Scuola di Osservazione Aerea”.

After he was appointed lieutenant, he began his long career in submarines and took part to World War II as a captain (“Capitano di Corvetta”); his brilliant activity in the Atlantic Ocean and in the Black Sea contributed to great results. From 1943 to 1945, with full respect for the oath taken at the Navy Academy, like some members of the Royal Family he was deported into Nazi’s prisons’ camps in Austria.

When this hard experience finished he could come back to Italy, where he went back to his work; during those years, his great experience and skills rapresented a very important contribute for the reconstruction of the Italian Navy Marina Militare, in collaboration with the national Air Force. His military career kept going on also in the following years and he worked also outside Italy.
On September 1981 his long and rich career in the Navy ended; he died in Rome on March the 12th in 1991.

In the town centre of Bagnacavallo there is a palace named after the Longanesi family.