The oratory has been rebuilt in an extremely simple way. In the past, it was connected to the suburban villa of Severoli family. The street, joining the traffic light crossing to Senio riverside, is planted with wonderful planetrees which used to adorn the destroyed Villa Severoli. 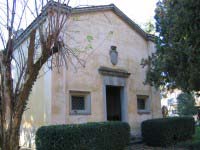 The oratory opened in 1732 by will of Giacinto Corelli, who wanted it to replace another church destroyed by a flood of Senio river occurred in 1730. It takes its name from the transfer, with apostolic pardon, of the Guardian Angel. In 1823, General Filippo Severoli was buried here.

Originally it consisted in an single room of baroque dimensions, culminating in an apse situated at the end of the semicircular presbitery and adorned by a painting depicting Arcangel Gabriel.
The original structure, completely destroyed during the Second World War, was embellished by a group statue representing Mars, Minerva and the bust of the dead general. It is private and it can be visited upon request.

How to get
Close to historical town centre.