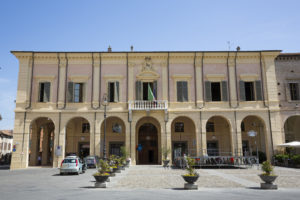 The townhall of Bagnacavallo, named Palazzo Comunale, is situated in the central piazza della Libertà. The townhall was designed by the architect Cosimo Morelli and built starting from 1791 on the ruins of the former old Palazzo Brandolini. At the time, nearby the building there used to be an arcade called “Portico delle Bugie”, which means portico of the lies, since it used to host the merchants while they were working and meeting each other.

On the neoclassical facade it stands the town coat of arms. Inside there’s a wide staircase leading to the main floor which hosts part of the municipal offices.
The major office hosts three marbles bass relieves (of the XV century) depicting the history of Tiberto VIII Brandolini, merchant captain whose military exploits are linked to the Sforza family and to Gattamelata; Tiberio was the original owner of the medieval palace which was destroyed to built the present one and the theatre Teatro Goldoni at the end of the XVIII century.

How to get
The building is in the main square piazza della Libertà. Car park with parking meter in the surrounding streets.