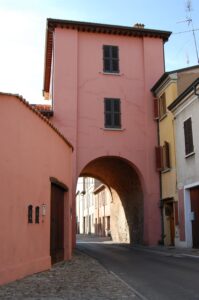 This city gate dates back to the Middle Age but its exact date of construction is unknown. Its name comes from the saint to whom it’s named after the near oratory dedicated to San Bartolomeo.

Over the arch, which has a six metres deep gallery, there’s a two storey building still inhabited as private house. The French Army distroyed it in 1796 and it was after rebuilt following the original design, which is very simple.

How to get
500 metres far from the main square piazza Baracca, Palazzetto ad garden Tondo direction. Car park along the road.