THE ARCHAEOLOGICAL DIGS IN THE CHURCH OF S. PATRIZIO OF CONSELICE 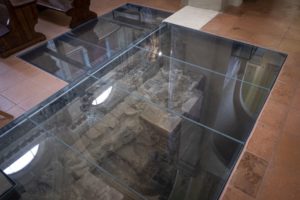 The inauguration of the new layout of the archaeological area in the Church of San Patrizio, which took place on 12 June 2013, concluded the process aimed at increasing the value of the archaeological remains discovered during the digs that were conducted inside the church on the occasion of the restoration and consolidation works carried out in 2009.

The digs have brought to light, underneath the current church floor, wall structures and floors belonging to the previous phases of the building.

The digs, which covered the entire church area, have identified a sequence of construction phases thanks to which it was possible to reconstruct, together with the archive news, the building history.
The most ancient building, which – on the basis of stratigraphic data – dates back to the 10th century and was mentioned for the first time in the texts written in 1092, was presented as a church characterised by a rectangular plan with a single nave and an apse following a well-documented type in the medieval parishes of the region.
During the following centuries, the church underwent a continuous aggradation process that led to the progressive elevation of the ground surfaces and the relative thresholds.
As documented by both historical sources and archaeological data, the church underwent a radical restoration at the beginning of the 17th century, which led to the demolition of the previous façade with a consequent extension of the building, to the construction of a small chapel instead of the side entrance, and to the further elevation of the internal ground surface, underneath which there was a cemetery area.
Between 1747 and 1753, some changes were introduced to the seventeenth-century building, which mainly consisted in extending the side chapel and in building a new chapel in the area next to the baptistery.
Some quite different important interventions were conducted between 1850 and 1875, when the church was completely rebuilt, adopting the shapes that still preserves nowadays. Extended until reaching its current dimensions, the church was fitted with two aisles, which were separated from the nave (the shape and dimensions of which were the same ones as those of the previous worship building) by rows of pilasters laid on the most ancient perimeter structures.

In order to increase the value of the structures and items discovered during the digs, a project has been developed on the basis of the in-situ museum-type display of part of the structures identified, the exhibition of a selection of findings and the preparation of two informative panels, one about the history of the parish church and its territory and the other one about the description of the digs that were made. 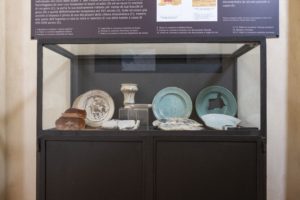 Such project, which was prepared and submitted in accordance with the Soprintendenza per i Beni Archeologici dell’Emilia Romagna, is aimed at increasing the value of the archaeological findings by restoring them to the context where they were discovered, while also focusing on making the archaeological structures turned into museum more usable.

The new exhibition space can always be used by the public during the church opening hours, and it is clearly visible by both regular attendees and occasional visitors. During particular cultural or religious celebrations, guided tours specifically aimed at illustrating the exhibited structures and archaeological findings can also be organised.

How to get
The church is located in the village centre of San Patrizio. Car parks. Accessible for disabled