He was born in Passetto, in the territory of Alfonsine, in 1754 and died in Milan in 1828. He is known as the most important poet of italian neoclassical poetry.

Born in 1754 in a village named “Passetto”, located in Alfonsine’s territory, Monti then moved to Maiano in 1769.
After his studies in Fusignano and in Faenza’s seminary, he moved to Ferrara, where he attended law and medicine courses. 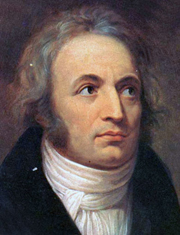 Anyway, is main interests soon focused on writing and literature; in 1775 he became a member of “Arcadia”, and after the publishing of his poem “La visione di Ezechiello”, thanks to the help of Ferrara’s legate (the cardinal Scipione Borghese) he moved to Rome in 1778. Since 1787 he wrote several works amongst which we rember the ode “La prosopopea di Pericle”, the hymn “La bellezza dell’universo” and the tragedy “Aristodemo”.

In 1797 he left Rome and stayed in Bologna, Venice and Milan, where he settled, becoming the secretary of the minister of foreign affairs of the Cisalpine Republic.

After the austrian-russian occupation (1799), Monti escaped to Paris, but was allowed to come back to Italy just two years after. Between 1802 and 1806 he tought “eloquenza” at Pavia’s university, was named poet of the Italian Govern and historian of the Reign of Italy. During those years he also wrote some works celebrating Napoleon.

After the Restoration, he worked at “Biblioteca Italiana” and composed some poems celebrating the new régime. In that period he wrote the Proposta (since he was attacking fourteenth-century purism of Italian language) in which he was proposing some alterations and addings to the Crusca vocabulary, he also took part in the debate between Classicists and Romantics by stating the importance of classical myths in poetry in his essay entitled “Sulla mitologia”. His masterpiece is considered to be the translation of “Iliade”.

Vincenzo Monti’s birth house is located in Alfonsine; it’s a mid- XVIII century building, it has been recently restored and now is a museum. Inside the house it’s possible to visit some rooms dedicated to the neoclassic poet and the didactic centre for environment named “Centro di Educazione Ambientale” which is about the natural park of Po river and Alfonsine’s natural reserve.