Ortolani Villa and Stables in Voltana were originally called Cacciaguerra. In the plate found on the pillar at the entrance we can also read Montagnola, a word that indicates the name that was originally given to Voltana central area, and which is still used today by the elderly in memory of the hill on which the first nucleus of the town arose. Such hill probably formed from sediments or the remaining part of a bank of the Santerno River, the watercourse of which long ago was on what is today Via Fiumazzo.

The Caccia Guerra Ortolani complex is made up of two buildings: the villa, farm and summer residence of the Ortolani family, and the stables. In the latter, the rooms on the ground floor were used as a stable for horses, sheep and pigs, as well as for storing horse-gear and all the tools that were used for animal farming; those on the first floor were used to house farm workers. Such buildings were probably built around 1820 on a place where there used to be two pre-existing manor masonry buildings, dating back to 1700-1720, 150 years before the birth of Voltana.

In those times, the area was marshy and most people were very poor and lived in indigent huts or sheds made of wood or valley canes; they moved around with boats and lived on fishing, hunting and the collection of marsh grass, which were used to make baskets, mats and bags.
Back in 1600, the Villa was already owned by the Cacciaguerra family; several data are unknown: the origin of this family (they were probably related to Alberico da Barbiano and to the Sforza family), when they arrived to settle on the margins of the marshes of this area, and how their properties were handed down to the Bondoli family, which was nicknamed Pastorelli, perhaps due to their activity.

There was no more news about the Villa until 1851, when Lorenzo Ortolani (native of Medicina and pharmacist in Lugo) married Teresa Bondoli – Pastorelli, who had Villa Cacciaguerra and dozens of farms as her dowry. In the “villa”, which up to then was inhabited by the bailiff of the Bondoli family, Lorenzo placed the economic centre of the family, and he personally ran the farm.
The “Villa” was restored with the installation of a balcony on the main façade and of a turret on the roof becoming not only the site of the farm but also the residence of the Ortolani family during the summer months. In the 1950’s, the Villa underwent more restructuring with the elimination of the turret, the building of a new floor with a balcony in addition to the one already present on the main façade of the Villa, and the inclusion of crests and decorations.
The importance of the Ortolani Family was extremely significant between 1851 and 1950, due to the technological innovations introduced and due to the commendable attention paid to the needs of the Voltana community.
The entire Cacciaguerra – Ortolani complex was purchased by the Fondazione Cassa di Risparmio e Banca del Monte di Lugo and remodelled in 2001-2002; then, only the Villa was sold to the Town Hall of Lugo.

Culture and education are the guests of the stables of Villa Ortolani, the historical farm complex of Voltana that was purchased in 1999 by the Fondazione Cassa di Risparmio e Banca del Monte di Lugo.
In addition to the residential building, the complex also includes the ancient structure of the stables, which represent an original historical archive of memory, a collection of historical proofs of the Lugo region divided into two sections, dedicated to the visual memory, with photos and films, and to the “places of memory”, testimonies obtained by means of interviews.
The Museum of the Ortolani Manor Villa therefore bears witness of one century of activities (since 1851) by the family that – with its farm – has contributed to the economic and social development of Voltana.
The museum hosts a beautiful exhibition of agricultural work tools (yokes, caveja – a sort of dibble, an iron and steel tool – pitchforks, spades, hoes, poles and pruning hooks) and animal farming tools (there is an interesting device created by the Ortolani family and illustrated in a picture shown at the museum, and which was able to optimise sheep service) in a period in which agriculture, without mechanical technology aids, was synonymous of great effort for farm workers.
In addition, you can admire some genuine curiosities, such as the poles that were manually made (stadia rod and staff) to define limits and elaborate the relevant cadastral maps, acknowledgement certificates, as well as cooking tools: pots and tableware, mechanical movement whisks and technologies of other times such as the machine to spin hemp, the grama, an ancient device for preparing bread dough, as well as components of decorated carts, a gig for children and bedroom furniture that also give evidence of the luxury of this family.

The notes about the Ortolani Villa have been taken from the book: Voltana, una comunità particolare (Voltana, a special community), by Atos Billi (Longo Publisher-Ravenna). 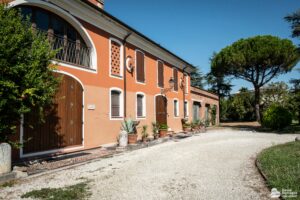 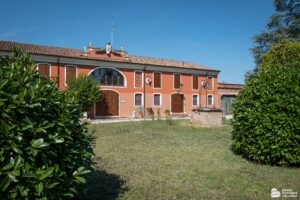 How to get
The mansion is located on the main square, piazza dell’Unità. Voltana is a small village at about 18 km from Lugo. Car parks on the square.

Opening informations
the mansion can be visited upon request