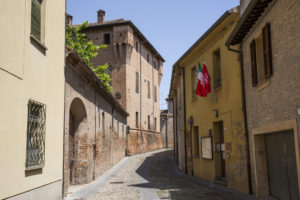 The so called Castellaccio is an old fortified building, part of the ancient Bagnacavallo stronghold. It dates back to the XII century, even if the current structure has clear XV century features. Now is a private propriety.

The imposing building has a brick facade with a socle marked by a rounded frame; on the top, at the corners machicolations are still present. The main door with a round arch leads to the entrance hall which then leads to the ground floor rooms, some of which are decorated with XX century frescoes. Another door leads to a wide inner yard with some smaller buildings used as store rooms and for other purposes.

In the XIX century the palace hosted some cultural academies, amongst which “Accademia dei Cillaridi” and then “Accademia degli Armonici”; those associations were made of local nobles and hierarchs of the church. The three storeys palace has been inhabited by several noble families, among which the Papini, and now inhabited by Bejor Gaiani family.

How to get
From piazza della Libertà go along via Mazzini and take the first street on your right, via Baracca. Car park in the area of the former covered market, located in via Baracca. Partially accessible to disabled.