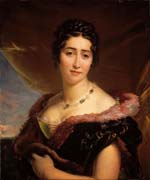 The countess was born in 1781 in Lugo, in the palace that now hosts the hotel “Ala d’Oro”.

Cornelia was a very charming woman; in 1802 she married Giovanni Battista Martinetti, a famous urban planning engineer, who presented her with a house, in the centre of Bologna, that had an important role in the cultural life of the country.

The house was actually the former convent of the Benedictine nuns (which had been shut down in 1796, located in via S. Vitale) and the crypt of the church of the saints Vitale and Agricola; the complex of these buildings was transformed by Martinetti in a sumptuous house for his wife, with an English garden with Neoclassical statues, fountains, columns and plants; the crypt was transformed into a cave with artificial stalactites.
The crypt-cave was a place for numerous activities, including poetry, flirting, gossiping as well as business (especially for Mr Martinetti, who was commissioned by Napoleon to design several urban planning jobs, such as the Montagnola in Bologna as well as others in Rome).
The ecclesiastical authority, on the other hand, never accepted that a crypt had been transformed into a mundane pro-Bonaparte club; the countess was also harshly criticised.

In the later part of her life, Cornelia became almost blind and increasingly less keen on social life, partly not to ruin the memory of what she had been once, and partly because she had lost her ability to entertain.
The countess died in 1867.
The garden disappeared with XX century urban redevelopment, the crypt was turned again into a religious building and the palace changed hands3 (it is now owned by Scagliarini Rossi).

Cornelia Rossi Martinetti was a very cultured woman: she spoke the four main European languages, she was knowledgeable about Latin and music and was a real charmer; her house was famous all over Europe and hosted intellectuals such as Monti, Leopardi, Byron, Shelley, Stendhal, Valery, Canova, Foscolo, Giuseppina de Beauharnais, Chateaubriand, Ludwig Von Bavaria.
But the memory of Cornelia is still eternal in Foscolo’s poem “Le Grazie”, in which she is described as the priestess of eloquence.