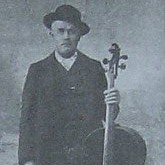 Custode Marcucci, known as Urlòn, was born in Lugo on 20 August 1864 and died in Sant’Agata sul Santerno on 3 December 1951. He was an Italian luthier.

Born into a peasant family, until the age of fifteen he worked the land alongside his parents, who in 1880 changed their line of work. It was against this background that he turned his hand to wood-working. Initially he worked as a cooper and also made wooden legs fitted with an ingenious mechanism for amputees.

At age nineteen he took up violin making, specialising in the construction of cellos and double basses, founding the “Award-winning stringed instrument factory – S. Agata sul Santerno” and achieving very high levels of quality without ever having studied with a lutenist.
It is said that he was able to produce perfect instruments from seemingly poor materials.

He died in 1951 and his tomb is to be found in the cemetery of Sant’Agata sul Santerno.

He was a humble man, somewhat shy and withdrawn, and he spoke in a low voice, which is why he was nicknamed Urlòn (someone who shouts) in local dialect. Even his instruments are called “Urlòn” because of their powerful sound. One of his double basses is owned by Giuseppe Ettorre, first double bass soloist of the Teatro alla Scala in Milan.

Inside the Town Hall of Sant’Agata sul Santerno there is a commemorative plaque which reads “In memory of Custode Marcucci, a renowned luthier, and man of profound humility; erected by the Town Council, 3 December 1952”. The Town Hall is also home to one of his violins.

In 2017 the city paid tribute to Marcucci with a series of murals created in via Mazzini by street artist Riccardo Buonafede. And the music school is named after him.