Manzoni gained an arts degree at the University of Bologna, where he was taught by Gianni Celati and Umberto Eco. He has always had a strong interest in Hebraism, philosophy, history of religions and esoterism. Manzoni has spent long periods abroad in Belgium, France and Germany. 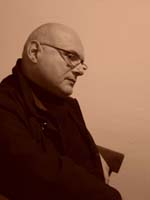 In 1982 and 1983 he was the editor of the magazine Cervo Volante, based in Rome and directed by Achille Bonito Oliva and Edoardo Sanguineti. He lectured fine art and history of art in Italy and abroad.

In 1984 and 1986 he has been involved in the Venice Biennale and also started to act in theatre.

He is related (cousin) to celebrated conceptual artist Piero Manzoni and is a descendant of writer Alessandro Manzoni.