Son of the famous painter Bartolomeo, Giovanni Battista was born in Bologna in 1521, where he died in 1601. Like his father he was a painter.

Like his father, he decided to become a painter and spent his youth training in his family’s workshop. His knowledge and skills as a painter were soon widened thanks to other local painters which he used to visit, as they were all friends of his father.

But truly important is actually his stay in Fontainebleau (1541-1545), where he had the chance to collaborate with Primaticcio, who was in charge of the decoration, which is now lost, of the Grotta del Giardino dei Pini (the so called cave of the pine garden). 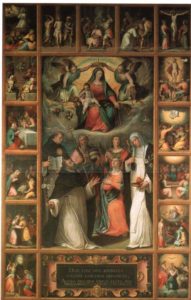 After his French stay, Giovanni Battista worked together with Vasari in Rome, at Palazzo della Cancelleria, in 1546, at the decoration of Sala dei Cento Giorni (the so called one hundred days room).
In the following years, as Counter – Reformation was growing more preminent, the style of the artist was forced to change toward more moderation and conformity to the new rules of religious representation, which were very well represented in Bologna by painters such as Cesi and Calvaert.

In Bagnacavallo there are works by Giovan Battista Ramenghi, amongst which: L’incredulità di San Tommaso (the disbelief of St. Thomas), in the church of San Girolamo; the Pala del Rosario (the Rosary altarpiece), in the first chapel on the right  in the church of the Carmine and the La Sacra Conversazione coi Santi Domenico e Caterina da Siena (holy conversation with St. Dominic and St. Catherine from Siena), which is displayed in the local art collection of the town museum ‘Le Cappuccine’.