Roman centuries are a very distinct landscape feature of the north-east area of Via Emilia; they are the manifestation of a complex system aimed at a more efficient use of the land.

Centuries used to divide the land in regular sections which were then irrigated with canals; roads would run along these sections in a very rational grid shape. The orientation of the grids was in relation to cardinal points, although sometimes it was determined by soil morphology; its main axes were known as cardo and decumano. Each section of the century was normally square-shaped (in the size of a 20×20 actus).
The main axis decumano in Emilia Romagna is via Emilia, a consular ro 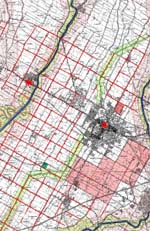 ad which was established in 187 B.C. to connect all the major towns at the foot of the hills.
The municipalities of Bassa Romagna occupy the area of the Roman agro imolese, which was included between the rivers Sillaro and Senio. The local cardo maximo of the area was likely to be the current via Selice.

With the crisis of the Roman empire (5th-6th century) some rural areas were abandoned and the Roman infrastructure of centuries, lacking appropriate maintenance, gradually gave way to marshes and wild nature.

After 1000AD these lands were gradually inhabited again.

Today the local landscape (with its canals, ditches and rows of fruit trees in the fields) and the road structure of this area reveal the grid of the Roman centuries. This grid has been partly modified by other man-made interventions, such as railway lines, roads or canals, just over the past 150 years.