History and some interesting facts
The “Piadina Romagnola” or “Piada Romagnola” ,the traditional bread , has ancient origins and tells the story of the people of Romagna. The first people that cooked a rudimentary version of the piadina were the Etruscans. They were pioneers in the cultivation and processing of cereals and therefore also in the production of “sfarinate” (simple sheets of dough made from various types of flour mixed with water, unleavened, and then cooked on slabs of scorching hot stone) that were very similar to the current “piadina”, also prepared unleavened and cooked on a plate of metal or stone.
It is a simple food that over the centuries has unified and given an identity to the land of Romagna, evolving from a symbol of rustic country life, as the “bread of the poor”, to a consumer product. The term “piada” was made official thanks to the efforts of Giovanni Pascoli who italianised the Romagnol dialect word “piè”. For more curious facts about this typical dish, click here.

Ingredients: 1kg. of flour; 4 g. of baking soda, 300 g. of lard and some salt.
Tools you need: A rolling pin, a fork and the terracotta “testo”, which is the traditional flat base plate on which the “piadina” must be baked. 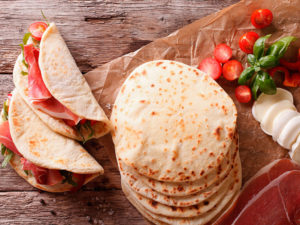 How to make it: mix all the ingredients together, adding a little bit of water or milk till you reach a thick and firm dough. Spread and roll out the dough by using the rolling pin on a flat base till you have not too thin round shapes. Every once in a while, spread the rolling pin with some flour, so the dough doesn’t stick to the wood of the tool. Put the round-shape dough on the terracotta “testo” to bake; under the “testo” there must be a fire which burns quite a lot since the “piadina” has to bake quickly. By using a fork, crush the bubbles which may rise up and… enjoy your “piadina”!