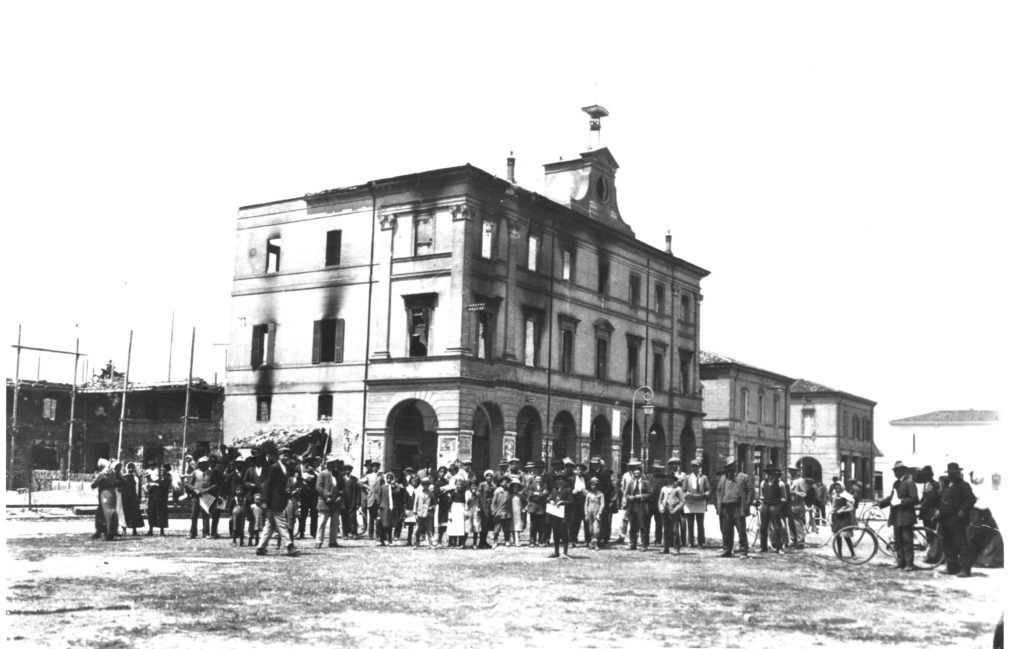 The so called Settimana Rossa (red week) was a series of revolts that – as Alessandro Luparini wrote in Settimana Rossa e dintorni – happened across Italy in June 1914, right before World War I.

It started out with the antiwar protest organised by various organisation and far-left movements (socialists, republicans, anarchists, revolutionary trade unionists) on Sunday 7th of June, the day in which monarchists and liberals celebrated the Statute.
In Ancona the Carabinieri repressed the protest; as a result, the republicans Antonio Casaccia (24 years old) and Nello Budini (17 years old) died in hospital and the anarchist Attilio Giambrignani (22 years old) died in the street. This tragic event was the trigger.
This kind of episode wasn’t new in those days, but Ancona’s events were the peak that lead to revolts in which socialists, republicans and anarchists fought together; the whole of Italy saw revolts in the streets and dozens of people, some of which from the army, died.

Only in Romagna people thought that the Revolution was about to happen. Republicans saw it as a way to wipe off the monarchy, after the failure of Mazzini and Garibaldi’s attempt in 1848-49 with the Repubblica Romana. Socialists aspired to it in order to achieve Karl Marx’s dictatorship of the proletariat. The anarchists, inspired by Bakunin, liked the idea of the Revolution because they wanted to destroy every manifestation of power, such as state, church, monarchy and masters.

Alfonsine’s Settimana Rossa created a sinister reputation for the town in the national map of rebelliousness. This is the town in which violence was stronger and where revolts hit harder the symbols of power and oppression. On July the 10th and 11th 1914 various buildings were burnt down; these included the town hall, the police station, the railway station, the Monarchist club, the church with its furniture and sacred objects. The bridge on the river was also damaged.
The socialists who had organised the strikes in June 1914 won the local council elections but had to leave, after just two years, on August the 31st 1922, when the new Fascist majority went into power and the opposition of the Republican party had to leave too. Socialists and republicans were harshly repressed by fascists.