Born in Villa Prati, near Bagnacavallo, in 1915; died in 2006. Catholic priest, partisan and historian. 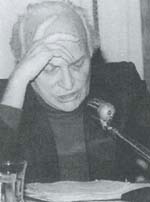 Father Lorenzo Bedeschi was born in the village of Villa Prati, near Bagnacavallo (Ravenna) in 1915 from a family of farmers with strong Republican values.
As a young man he studied theology and developed anti-fascist views quite early on, which he expressed in his first public speech, held in the summer of 1935 in Rossetta (near his native Prati); this event was reported to the local authorities.

Thanks to the help of the archbishop of Ferrara Ruggero Bovelli he gained his degree in the summer of 1940 in Rome at Università Gregoriana, exactly the day in which Italy went at war.
He was then sent to the Balkans as military priest and was also briefly detained in prison for some political comments he had made during the mass. As military priest he was also in Greece and Yugoslavia until September 8th 1943, when he came back to Romagna and joined the local anti-fascist movement. He was actively involved in the resistance and the liberation movement; after the war he was awarded the silver medal for military valour.

In 1963 he was one of the founders of Istituto Storico per la Resistenza in Ravenna and in 1964 he established and directed the historical research institution Centro per la Storia del Modernismo in Urbino.
In 1989 he created the Fondazione Murri, aimed at fostering historical research about Romolo Murri.

Father Lorenzo Bedeschi continued to practice as a priest throughout his life, alongside his academic career.

He is considered one of the most important historians of catholic modernism. He lectured at the University of Urbino for many years, where he taught contemporary history and history of political parties.