Father F. Girolamo Bonoli, author of Storia di Lugo, maintains that a Jewish community settled in Lugo in the 13th century; their arrival might be linked to the flourishing market and economy of the town, which required cash flow. Jewish people lived alongside locals in various areas of Lugo. 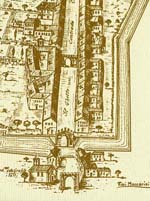 The 16th century was a particularly flourishing century for the local Jewish community.
The Este had no religious prejudices and favoured the arrival of skilled and rich migrants; indeed the Ferrarese seigniory mediated the influence of the church and made it possible for anti-Semitic propaganda not to spread. When the church enforced the use of a yellow badge in the Ducato Estense (which had been prescribed by Pope Innocence III in the 4th Concilio Lateranense in 1215), the Este obtained the exemption of this humiliating imposition for doctors, bankers and students.
Moreover, Lugo’s Jewish community was spared the consequences of the anti-Semitic laws created by Pope Paul IV and Pius V in 1555 and in 1569.
The former enforced segregation in ghettoes, as well as various other things, including: the restriction to one synagogue per town, the prohibition to own land and buildings and to hire Christian servants, the prohibition to work on Sundays, to meet Christians, to use Hebrew in their lending registers and several other humiliating restrictions.
The latter, created by Pope Pius V, relegated all the Jewish of the Papal States in the ghettoes of Rome and Ancona. All these laws hit Jewish communities in Romagna, except for the one in Lugo, which flourished until the end of the 16th century; their synagogue was in Via S. Maria in the house of Zanelli.

In 1597 Alfonso II d’Este died without heirs, the following year Pope Clemens VIII claimed the Duchy of Ferrara to be part of the Papal States; the Jewish community of Lugo, who had lived peacefully for four centuries, had to adapt to the new ruler. In 1639, Pope Clemens VIII ordered that all the Jews of the Duchy should be confined and surveilled in just three cities: Ferrara, Cento and Lugo. 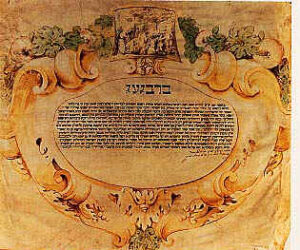 In Lugo, between 1635 and 1638, the community was placed in a ghetto at the end of Via S.Agostino (now Corso Matteotti).
The area was secluded with two gates which were opened at the start of the day and closed at night when the Ave Maria’s prayers were called; the ghetto’s gates were under surveillance at night.
At the beginning of the 17th century, Lugo’s ghetto received all the Jews from Bagnacavallo, Cotignola, Massa and Fusignano, who were forced to leave their homes.