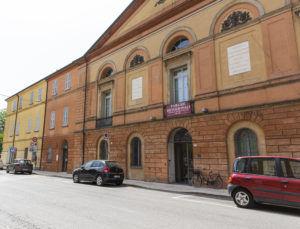 This historical building named after “San Rocco” has been recently restored and turned into a Cultural centre; is houses important art exhibitions and cultural events.

The building rises where the ancient institution “Hospitale dè pellegrini”, dated 1517 and designed by Giacinto Corelli, had its seat. Built towards the end of the XVIII century as a hospital of the local poor people, the magnificent house was inagurated in 1796. Worth of particular mention are the inner stairs and the column hall on the first floor, where statues of the Praying Virgin and San Rocco are to be found. They are works by Paolo Visani from Cotignola and date back to 1865. The facade on Piazza Emaldi, where S.Rocco church used to be, after being destroyed during the World War II, was restored by the architect Alberto Legnani while he was rebuilding almost the whole town.

The permanent collection of the San Rocco Museum of devotional images has been made possible thanks to the kind donation of Mr Sergio Baroni, has a rich and wide documentation able to reconstruct the history of religious folk devotion through images and ceramic crafts.

The collection is made of more than 200 pieces coming from Emilia-Romagna region, from the main central-Italy towns of ceramic workshops, but also from other Italian regions, while two pieces are foreign, one is French and the other Spanish.
The pieces date back in time from the XVI to the XX century and show several ichonographic styles regarding Mary and other Saints which used to protect houses or used to be placed at crossroads in the past. Most of the pieces exhibited here carry the date and other clear informations regarding the geographical area from which they come from.

Since 2001 the collection has been enriched with new pieces, which are also a gift from Mr Sergio Baroni. Some come from Naples and date back between the XVIII and XIX century, they are quite big painted majolica pieces depicting “Madonna del Carmine”, “Deposizione” (the deposition from the cross) and “Trinità” (the trinity) and they’ve been placed in the southern Italy section of the museum which, in the intention of its donor, is intended to start a unique display, in its kind and style, in Italy.

How to get
Historical town centre, along the main street leading to the town square. Disabled facilities. Car park along the street.