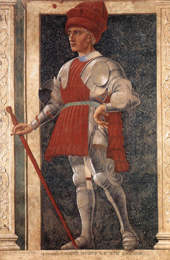 Muzio Attendolo Sforza was born in Cotignola in 1369 and died in 1424. He was a mercenary captain.

Muzio was born in 1369 and he was part of the local wealthy farmers’ family named Attendoli; he’s the founder of Sforza’s dynasty.
As a child, he was attracted by military life so, at the age of thirteen, Muzio began working as a mercenary soldier for a captain from Spoleto, and after he emproved his military skills within several mercenaries’ bands, till he was appointed commanding officer for Alberico from Barbiano and Francesco Broglia.

In 1398 he was asked by the town of Perugia to fight against the Milanese Lord, Gian Galeazzo Visconti, who was defeated and so had to give the city to Muzio. In the following years, he spent a hard life as a mercenary captain for the main Italian signorias.

Giovanna II, Queen of Naples’ reign, asked him to take the name “Sforza” and John XXIII named him count of Cotignola. Through useful marriages for him and for his relatives, he was then able to widen his dominion in Tuscany, Basilicata, Calabria, Abruzzi and Puglia.