The traditional walk on April the 25th has an itinerary which runs along the river Senio; it is possible to complete it on foot or by bicycles. The 18km itinerary will be enlivened by events such as oral literature, theatre performances and music, to celebrate and remember the battle on the Senio and Resistance.

Senio is a river of memory, because the memory of war lies above it like autumn fog, which you can only fully understand and breath if you walk slowly. The Senio river was the front line between Nazis and partisans and locals, during World War II.
The river Senio also includes memories of the rural landscape and its people, including floodings, hard work and taxation. Now the river has also become a place for theatre shows and narratives.
The walk on April the 25th pays tribute to those historical events with shows and concerts. Two walks along the river will start respectively in Alfonsine and Cotignola, meeting in Borgo Pignatta. 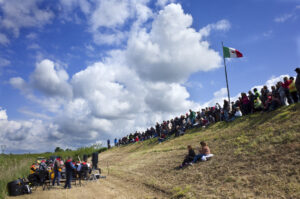 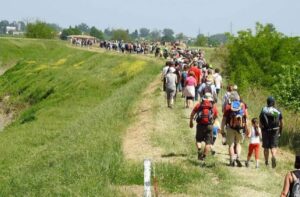 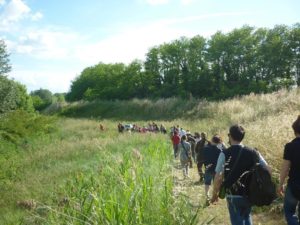 The two starting points: Alfonsine and Cotignola
From Cotignola, piazzetta Gino Zoli at 9am.
From Alfonsine, Piazza Vincenzo Monti at 9am.

In Borgo Pignatta at 12 p.m. on via Sottofiume at the Memorial that commemorates the 28 victims of the slaughter that took place in the night of the 23rd of December 1944: the youngest one is Celsa, who was three months old; the oldest one is Giuseppe, who was 86 years old.

In Fusignano at 3.15p.m. on via Rossetta, at the point in which the Liberation troops crossed the Senio River.

In Rossetta at 5.00p.m. in the Old Asylum Garden, next to the Municipal Centre.
At 6.00p.m. Tea party offered by the population of Rossetta.

At the end, we take you to the starting point of the walk by bus: stops in Alfonsine, Bagnacavallo, Cotignola, Fusignano and Lugo.
In case of rain, the walk is postponed for 1st May.
Organised by the Associazione Culturale Primola of Cotignola.