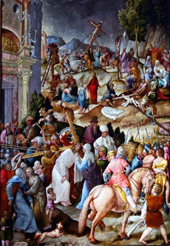 Pietro Bacchi was born in Bagnara in 1520 circa and died in the monastery of S.Giuliano in Imola, probably between 1590 and 1595.

At the age of thirty he became a monk, he graduated from university and began practicing as a preacher, but was especially known as a painter with the pseudonym “il Bagnara”. He studied painting in Imola, Bologna and, after a while, in Padua and Ravenna.

A painting on wood made by Pietro Bacchi is kept inside the local museum “Museo Storico Parrocchiale“, where it’s possible to be seen together with other art works and sacred art objects.