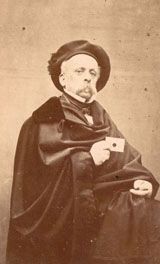 He was born in 1806 and died in 1888 in Bagnacavallo. He was a botanical researcher.

Pietro Bubani was born in Bagnacavallo in 1806 from an important family of the town.
He studied at the university of Bologna and graduated in medicine.

But soon he had to leave Romagna, which, at the time, was still part of the Papal State, because he had taken part to the revolutionary risings of 1830-31; first he moved to Tuscany, and then he fled to France, where he carried on with his studies in botany. Those turned out to be very important and in France he studied particularly the flora of the Pyrenean mountains, which wasn’t very much known in those days; but he was able to discover for the first time new species which weren’t known yet and he also wrote his most important book named “Flora Pyrenea”.

Thereafter he went back to Italy again and took part to the risings of Risorgimento, which later led to unify the country.

Pietro Bubani died in 1888; he was almost completely blind and fell from the balcony of his palace.

Pietro Bubani was born and died in the family palace Palazzo Bubani, which is located in via Ramenghi, in the historical town centre of Bagnacavallo; the palace has been recently restored.